The theme of 2022’s Playday was All To Play For – building play opportunities for all children.  The aim of this year’s theme was to highlight that play is for everyone.  At Play Scotland, we know that play happens everywhere, every day and is every child and young person’s right under Scots law.  However, it is important to us to know our members’ and followers’ thoughts about play in Scotland.

In August, we informally, and unscientifically, asked five simple questions on social media and through a short questionnaire. 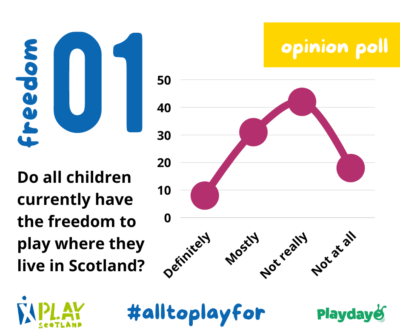 Interestingly, nobody thought that ‘money’ was barrier to play, yet two thirds cited safety as the number one limit to children’s play. 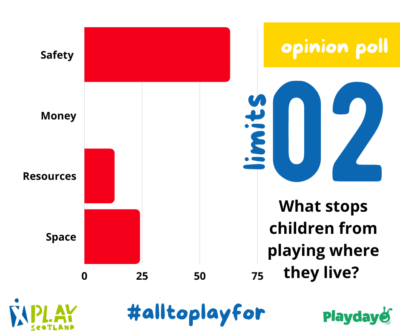 Respondents also commented on the lack of dedicated outdoor play spaces or shortage of indoor halls to rent for baby and toddler groups.  There were concerns that play equipment is not properly designed for all children, isn’t adequately maintained and is subject to vandalism.

It is no surprise that 3/5 people thought that Covid-19 and the restrictions of the past few years has had a negative effect on children’s play. 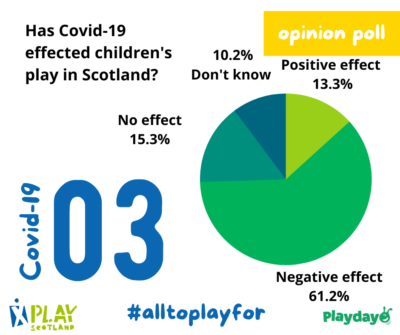 However, some were able to find positives with the restrictions for some children and their families:

Three-quarters of respondents said that the cost-of-living crisis is having negative effect on children’s play. 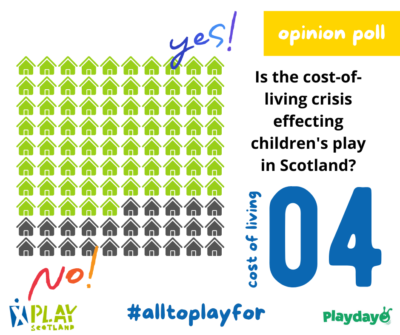 However, as with Covid-19 restrictions, some respondents were able to look at the cost-of-living crisis and its effect on children’s play from a positive angle:

Almost half of respondents said that cleaner, greener spaces would help make play more inclusive for all children.  Closely followed by the need for improved equipment, especially for disabled children. 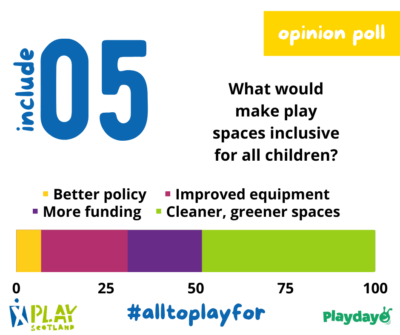 We would love to keep this conversation going, are there any surprises in these responses? Do you have you anything to add?